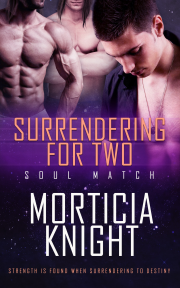 Unlike Chris and his cousin Morgan, Graham wasn’t fortunate enough to fall into the hands of “uninfected” Alasharians who wouldn’t harm him. Instead, he had the misfortune to end up with the Alasharian leader, the Nall, who has been infected by the evil force of the Void. The Nall abuses Graham sexually and even scars him before the young man is rescued from being put to death at the end of the previous book, Hiding From Two. Although an Alasharian is one of the people who rescue Graham, he still finds it almost impossible to trust them, so how will he react when two of them appear to be his soul mates?

Given the way the previous book in the series ended, you may have thought, as I did, that this book would have focused on the now open battle between the good and evil forces seeking control of Earth. Instead, the main plot “Surrendering for Two” is more of a detour to develop the character of Graham, who only appeared in the last chapters of the previous book. Although unexpected, you can see the point of this slight change in direction: Although there’s been plenty of drama swirling around them, things between Chris, Morgan and their Alasharian mates have been rather lovey-dovey fluffy bunnies. It’s probably a far cry from what other human slaves like Graham have been through.

Thankfully I have no direct experience to go on, but Graham came across as a believable character. As is often the case in these types of stories, his change of heart may seem to come a little too easily, but the author does a good job of making the pull of the soul match sound irresistible. I’m sure it succeeds at least in part because it plays into a rather basic desire — that there’s someone(s) out there meant for us, and when we meet them we’ll both know it.

I also liked the way this story turned around some common tropes to these books, and similar stories in the genre. All too often, the humans in these kidnapped-by-aliens stories are put in the submissive role. There’s nothing inherently wrong with that, but it does make things rather predictable. Given his experiences, it’s extremely unlikely that Graham would have been able to be a sub for his two Alasharian mates. It would have made his acceptance of them as lovers that much harder to swallow. Placing Graham in a dominant role is much more believable, and making the larger, more muscular Balor the submissive further bucks common stereotypes. In all, it’s another page turner that sets things up for the next and last book of the series.

“Surrendering for Two” is available from Amazon.