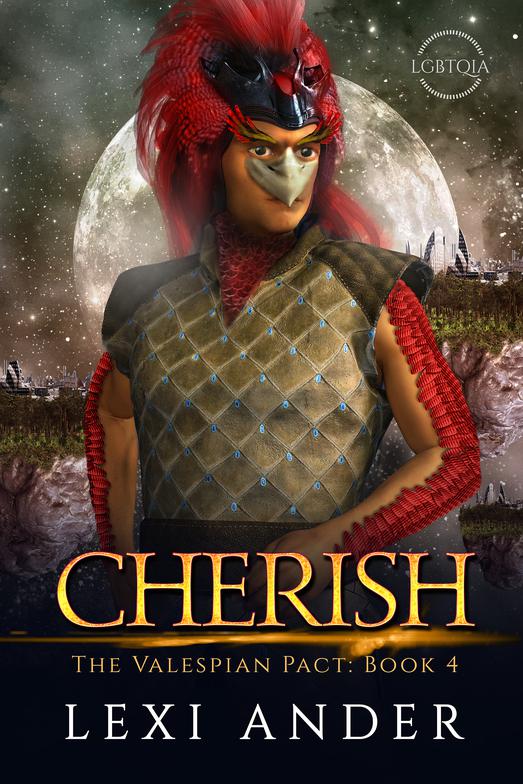 Volume 4 of The Valespian Pact

Kindly note that some of the more interesting aspects of this story are hard to discuss without revealing a few details of the plot.

The GyrFalconi of Aires 7 have lived in relative isolation for hundreds of years; the technology that bought them across two galaxies to their new planet largely forgotten. That leaves them totally unprepared to fight off the Terrens who invade their planet to mine the rich deposits of an high energy crystal, enslaving large numbers of the GyrFalconi to work the mines. Destin is one of the people captured early in the invasion, but unlike many he doesn't give up and die when he wakes up to find his wings removed, and he even seems to have the ability to inspire others not to give up. The humans make use of his talents and keep Destin out of the mines. The Valespian Pact worlds send help to wrest control of the planet back from the Terrens, but it takes a long time. When he is finally freed, Destin and the other survivors face new trials, as the “wingless” are shunned by the rest of society. They're left to form new bonds and find new family among other survivors and the few GyrFalconi who defy the Empress' cruel wishes.

“Cherish” is a significant departure from the first three books of the series. It is in effect a prequel, taking place many years before the events of the previous stories. That means you can read this book without having read the volumes that came before. Few, if any, of the characters from this story appear in the other books.

Perhaps the biggest departure of this book is its exploration of such a wide range of sexuality. The GyrFalconi effectively have three genders. The male stags traditionally live apart from the others in rookeries where they may form bonds with two or three other stags. Our main character Destin is a “batore”, essentially a non-reproductive asexual male. Batore form life bonds with a female “chantelle”. When the pair want to have a chick, the chantelle will visit a rookery for some more or less anonymous sex with one or more stags, and then return to her batore. When an egg is produced, the chantelle passes it to the batore, who will incubate it in his body until it is hatched, and then take on much of the responsibility for raising the young, who are slow to mature.

The war throws tradition out the window. Destin is separated from his chantelle, and ends up forming a bond with a mated pair, as well as two other batore. When the war ends, and the survivors find themselves shunned by their former mates, the five remain together and set up an unconventional roost to support each other. They take in a young fledgling and also start incubating eggs that the Terrens experimented on. It's while taking on yet another egg that Destin meets Zenon, a stag that while not wingless, is still something of an outcast. It seems that some stags aren't that happy having no involvement in the lives of the chicks they help create. Dustin's family grows into a polyamorous collection of asexual, homosexual and bisexual individuals.

While the “found family” theme runs through the the entire story, it's not necessarily the main plot line. The story is also setting up the GrayFalconi and the ancient species that the wingless become intermixed with, as the universe heads towards a galactic war that was becoming imminent in the first three books.

“Cherish” is available from Smashwords and Amazon.