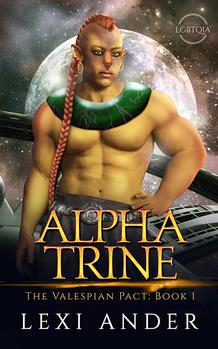 Volume 1 of The Valespian Pact

A Terran space ship is found abandoned near the Mar’Sani home world. The only survivor on board is a blind infant taken to be human. Grieving over the loss of their own son, the Mar’Sani royal family adopts the boy, Zeus, and raises him as one of their own. Although loved by his fiercely loyal family, Zeus is never quite accepted by the rest of reptilian Mar’Sani society. After one particularly bad incident, Zeus decides to take a posting at a space station.

Captain Dargon is on the run from forces who seek the downfall of the powers that protect all the worlds against the invasion of a ravaging insect species. If he doesn’t get his cargo to Valespia, the battle may be lost, but his ship is damaged and he needs repairs if they are to make it home, so he puts into the station where Zeus is working. Dargon and his crew have more reason than most to hate humans, but he, and his symbiote Alpha, are instantly attracted to the station’s master mechanic, whom they believe to be human. With time running out, Dargon decides to kidnap the mechanic so he can finish the repairs en route, little realizing that Zeus is much more than he seems.

“Alpha Trine” manages to pack quite a bit of story into a relatively short novel. With a light mystical element (á la Star Wars), the story is a blend of science fiction and fantasy that doesn’t stretch credulity too much. The characters, even very minor ones, are described in a way that fires the imagination and makes them very engaging within a few sentences. There’s also more than a little gender-bending going on, as well as some challenging of traditional relationships.

Zeus is quite an interesting character. He is not some thinly veiled damsel-in-distress, such as is all too common on many gay stories. He has a great deal of mental as well as physical strength, something which in itself creates an unusual dynamic with Dargon, who imagines himself as the top dog in any relationship. The presence of a third being, in the form of Dargon’s symbiote, adds yet another layer of complexity to the dynamic.

This was definitely a wild ride, that ended a little too quickly. However, it does end in a place without too many dangling loose ends, but that doesn’t mean I won’t be reading the second book in the series quite soon.

“Alpha Trine” is available from Amazon.