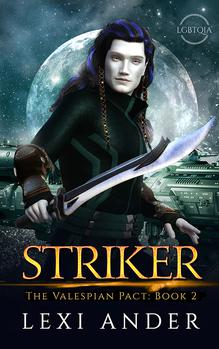 Volume 2 of The Valespian Pact

Zeus may have been hoping for some quality time with Dargon and Alpha, to whom he was mated in Alpha Trine, but that’s not going to happen any time soon. The three, along with Zeus’ two brothers, are heading towards Valespia with their precious cargo. Only, the planet has gone very quiet, so the crew has no idea what they’re flying into when they get there.

Picking up right where “Alpha Trine” left off, this sequel offers quite a roller-coaster ride as the group makes their way to the planet Valespia, while trying to pick up allies along the way. Zeus is very much front and center for all the action in this book, as you might easily guess from the title — assuming you’ve read the first book in the series. Dargon and Alpha, and Zeus’ relationship with them, are definitely central to the story, but it falls upon Zeus to protect them as well as the rest of the planets from the insect invasion.

Zeus is a remarkably consistently portrayed character. He grows in confidence over the course of the two books, but still remains essentially the same person. It’s not so much a coming of age as a matter of maturity. Zeus is something of a classic underdog: someone that most people, including himself, underestimates. However, as he gains confidence in his abilities and his need to protect his mates, his enemies soon regret considering him inconsequential. The denouement near the end where one of Zeus’ old enemies gets his comeuppance is especially delicious.

The ending of this volume wraps up much of the main story line regarding Zeus, Dargon and Alpha, but does leave a few loose ends. At least some of those dangling questions will probably be picked up by the next book in the series, which doesn’t have a release date as of this writing. Despite the unanswered questions, this book still ends in a really good place, so that the wait for the next installment won’t be too painful.

“Striker” is available from Amazon.