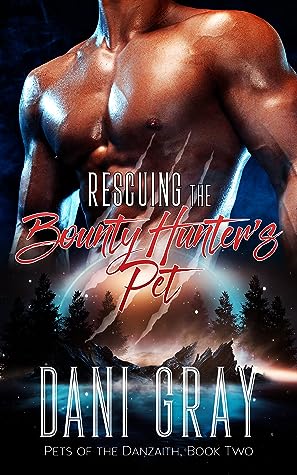 Volume 2 of Pets of the Danzaith

Kayel is a bounty hunter, working just inside the law, most of the time. That makes him a good candidate for a secret mission to a restricted planet where illegal slaves — ‘pets’ — from Earth and other worlds are being kept. The king wants to bring about an end to the slavery and bring the high ranking perpetrators to justice, but do it without harming the slaves. Kayel's mission will be to infiltrate the operation, gather intelligence, and plan the operation to free the captives. Things go a bit awry when Kayel spots the slave Jeremy and senses that the human is his fated mate.

Like the first book of the series, this one wastes almost no time in getting right into the action. We don't really get to know Kayel, and can only guess that there's some history between him and captain of the guards Kavell that makes the king's aide choose him for the mission. He doesn't take any convincing and seemingly infiltrates the ring in a matter of days. Although we're supposed to believe he skirts the law on occasion, Kayel cuts a rather heroic figure.

As in the previous book, there's not a whole lot of character development done, but there is a bit more focus on just the two main characters. The Earthling Kayel instantly decides to make his “mate” is Jeremy. He seems to be a sweet, barely legal, young man, although by the time we meet him he's hardly innocent, having been kept as a sex slave for nearly two years. Fortunately, we're not treated to hardly any details of what was done to him.

The breakneck speed at which things happen certainly stretches credulity, but it does make for a very quick read. This volume seems a bit better written that the first book, but I still probably wouldn't have been able to stand it if it was much longer.

“Rescuing the Bounty Hunter's Pet” is available from Amazon.