Review - Kidnapped by the Gentleman by Drake LaMarque 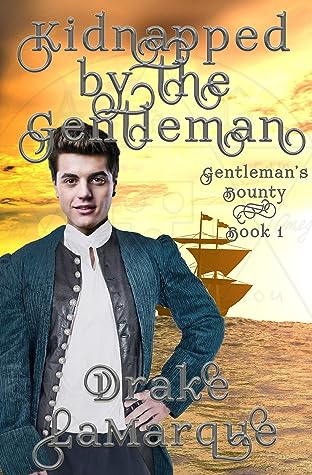 Kidnapped by the Gentleman

Cedric is a rather feckless young man from London whose only talent seems to be getting into trouble. His despairing parents send him off to Kingston with his tutor, where they think there will be less opportunity for him to get in trouble. That plan clearly didn’t work out too well, so when Cedric returns home one morning after what he assumes was a particularly debauched night in a club — he assumes because he can’t remember any of it — he finds that his tutor has received orders for them to return immediately. When out running a last minute errand, Cedric is kidnapped by pirates, who plan to hold him for ransom. The poor pirates have no idea what they’ve gotten themselves into.

“Kidnapped by the Gentleman” is set in the same fantasy world of magic and pirates as the His Piratical Harem series, but introduces a new cast of characters. Cedric is at the center of things, and like his counterpart Gideon in the previous series, he’s a young man who seems to stir strong emotions in other men, and has a heart big enough to not be satisfied with just one lover. However, while there are a lot of basic similarities with the other books, this one has its own plot line, and it’s fun to see where things go, even though you’ll have some ideas if you’ve read the other books.

Cedric is an interesting character. He doesn’t seem to have, or at least he doesn’t listen to, an instinct for self preservation. It’s quite easy to see how he can be both infuriating and endearing to those who fall under the spell of his charms. Those that fall for Cedric primarily include a couple of the pirates that kidnap him. The captain, “Lucifer”, is a man with his own secrets, although perhaps not as dark as the secret of the first mate Dante.

Although set in the same fantasy world as the previous series, this story is far from a retread of the same plot found in the previous books. The author has managed to mine fresh story lines from a mix of eighteenth century Caribbean pirates and the myths that surrounded them, which includes mer-people, witches, selkies, and much, much more.

“Kidnapped by the Gentleman” is available from Amazon.