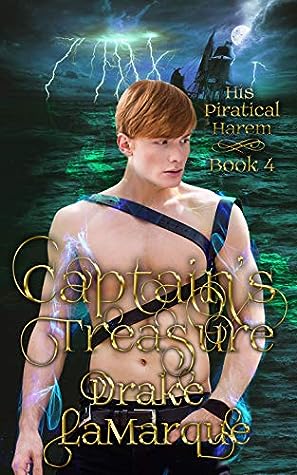 Volume 4 of His Piratical Harem

Warning: The books of this series are meant to be read in order. If you haven’t read the first three books, this review of the fourth will contain some spoilers.

As you may recall, as the last book ended our sexy cabin boy Gideon and his lovers were sailing into an almost-certain encounter with Solomon, the powerful sea witch and ex-lover of Captain Tate. Will Gideon’s newfound magical powers be strong enough to protect himself and his lovers? Even if they escape Solomon’s clutches, they’ll still have the Royal Navy on their trail.

This fourth, and last for now, book of the His Piratical Harem series wraps up the story lines of past conflicts rather nicely. The issues with Solomon seem like a gordian knot, yet the story’s solution makes sense with all that happens leading up to it. The issues between Gideon and his father, which has had the navy chasing the Grey Kelpie throughout the series, also seems to be a challenge that the young man has to unravel somehow.

One generally doesn’t have high expectations of pirate fantasies, beyond a few hours of escapism, but this series has delivered a strong plot that has sustained it through all of the books. As I pointed out in the review of the first book, the writing style flows quite well; simple without being too Dick-and-Jane. There’s also the constant of a seemingly modern queer sensibility, with gender-fluid and trans characters, although as I also pointed out, this may fit in rather well with what we know about the real pirate culture of the eighteenth century.

“Captain’s Treasure” is available from Amazon.