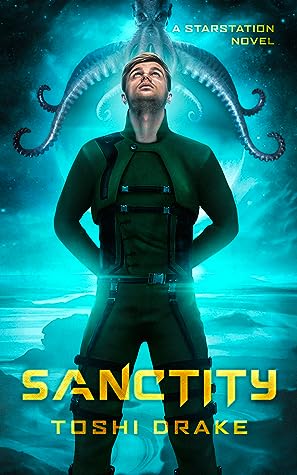 Jax Trest is the chief engineer on board the Padua, so when the ship's mechanique Michael Collins gets stranded on an abandoned ship, it's Jax's job to try and support the squid-like ship's heart, even though humans can't bond with the hearts, in theory. When Collins is finally rescued and reunited with the heart, the loss of the connection Jax had with it sends him into a spiraling depression, made more difficult by the belief that he can't explain the problem to anyone. They either wouldn't believe him, or turn him into a lab rat. While the command team may not know what is wrong, they recognize the signs of stress and arrange for Jax to get counseling while the ship is in for repairs at a star station. But what should be a much-needed rest turns into a roller-coaster ride of emotions and physical danger.

“Sanctity” overlaps with the previous book in the series, Entity, a little bit, but you'll need to have read the first book to have the full background on the idea of ship's hearts, mechaniques and space pirates.

Jax appeared in the first book, but we didn't get to know much about him or what he went through while Collins was away. He's painted as a stoic man who has trouble talking about his feelings. It's a common archetype but I thought it was stretched a little too thin in this case. Jax is still a compelling character, especially when things get going.

This story initially lulls you into thinking it's going to be a soft romance about Jax finally finding someone who can break open the hard shell he's built around his emotions, but then it quickly goes sideways when he realizes he is being stalked, and then kidnapped. The book quickly becomes a page-turning thriller in much the same vein as the first book.

Jax's quirky new friend Zoagashta is definitely an interesting character. They come from an alien culture with much different ideas about gender identity. We really don't get to know enough about their culture to satisfy my curiosity, but Zoagashta still becomes a quite real and sympathetic character.

“Sanctity” is available from Amazon.