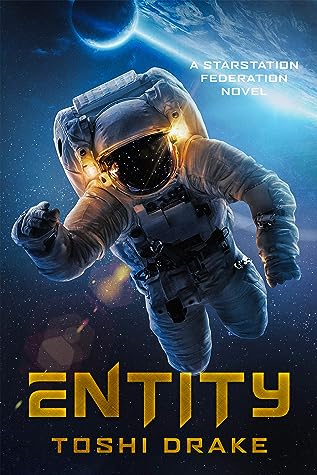 Michael Collins is the ship Padua's “mechanique”, a member of a humanoid species that bonds with the octopus-like species that pilots the ships for interstellar flight. His bond allows him to communicate with the “ship's heart”, forming a bridge between the crew and the cephalopod pilot. When the Padua encounters an abandoned ship's heart in space, the captain orders Michael to leave the ship to guard the heart, even though mechaniques are not supposed to leave the heart they're bonded to. It's just the beginning of a harrowing experience that involves an abandoned ship and a mysterious strange child.

“Entity” is a rather fresh concoction of familiar sci-fi themes. The world-building is quite well done, creating a believable future populated with very believable humans and human-like aliens. However, this is definitely a more character-driven story. The entire narration is told from Michael's point of view, and we can really get into his personality as he deals with successive surprises. While in theory not a human from Earth, Michael is still a very relatable character.

There are other characters in the story. Perhaps the most important, especially to Michael, is his partner Eizen, the Padua's first officer. It's Michael's occasional communications with Eizen that helps keep him sane while stranded more or less alone on the abandoned ship.

The story is a bit of a thriller. Not too scary but enough to keep you reading to see what happens next. There's a lot of content that's just Michael, alone with his thoughts, exploring a mostly dead star-ship. It has the vibe of classic sci-fi suspense movies, although I can't put my finger on any specific one that it reminds me of.

“Entity” is available from Amazon.