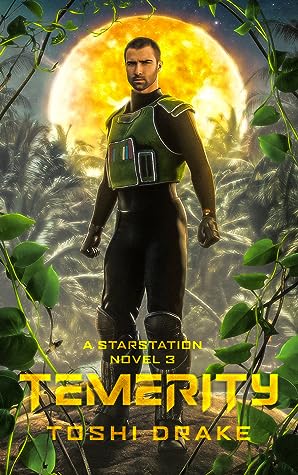 Gratch is trying to enjoy a bit of downtime at a resort where he and the rest of the crew are attending a conference between the Terran forces of the VCC, the Maternai who control the ship's hearts, and the Asyrans. Everyone wants to know why the pirate Siwa are so set on getting ahold of the cephalopod navigators, as well as why they're so focused on the Padua and her crew. Unfortunately, trouble still follows them wherever they go, and now they seem focused on getting their hands on Gratch.

This third outing of the Starstation series picks up shortly after the events of the previous book, Sanctity. This time it's grumpy security chief Gratch's turn to take the spotlight. Precisely why the pirates and others focus on the security chief never really becomes clear, but he does manage to lead everyone on a merry chase, with the help of Tyr.

Tyr turns out to be sort of a spy working for the Paternai, who also wants to know why the pirates seem to have inside knowledge of the workings of the Maternai. He seems to have a knack for getting on Gratch's nerves, as well as getting the security chief out of trouble. Tyr is an interesting character. His forwardness in his pursuit of Gratch is likable, yet he has a dark side, as he also needs to get to the bottom of the intrigue surrounding the Maternai.

The unanswered questions from this story means there's at least one more book coming in the series. These stories are almost but not quite standalone. You should read all of them to get the full background on the recurring characters. There is quite a rich set of personalities in this series, along with a very queer sensibility.

“Temerity” is available from Amazon.