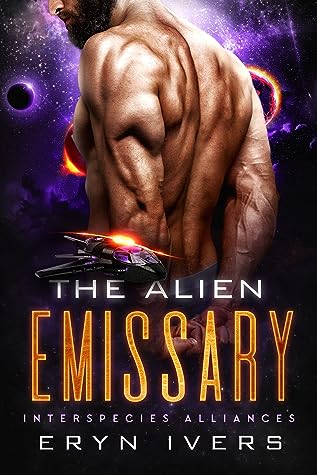 Bryant has been working, albeit unwillingly, for one of the criminal gangs that operate on the space station for many years, so he’s no stranger to breaking the law. However, burglary isn’t one of the things he’s had a lot of practice at. But, he needs money quickly to keep his daughter from being shipped out to a prison planet, and stealing a small trinket from a fancy ship in the dock seems like the easiest way to get it. What Bryant doesn’t know is that, while the vessel may appear unguarded, it has sensors that quickly alert the owner to his presence, and mechanical tentacles that allow the Emissary to restrain the thief, among other very interesting things. Serihk isn’t sure why he is so fascinated by the human male. It definitely has something to do with the way the muscular man seems to submit to, and enjoy, being restrained and manhandled by his technology. It brings out protective instincts he didn’t know he had. But, will that be enough to keep Bryant around?

“The Alien Emissary” is a fast-paced novella that doesn’t spend much time on world-building or developing the characters. That’s not always a bad thing, but in this case, it does leave us with a few questions, especially about Bryant. The need to rescue his daughter and keep her safe is a key driver of the story, yet how Bryant came to be a single (apparently gay) father is never explained. It seems like there were plenty of opportunities to work it into the conversations as Bryant and Serihk got to know each other, but it never happens.

Aside from that one glaring exception, the characters are reasonably well developed. We may not get as much of the background as we’d like, but Bryant’s motivations and reservations about Serihk are easy enough to understand. The alien Serihk is a little harder to know, but read as a dominant, he is relatable enough.

There isn’t a lot of drama to this story. Once Bryant and Serihk get together, it’s pretty linear. It’s about what you would expect from such a short book.

“The Alien Emissary” is available from Amazon.