The Hunt for Red Fluffy by Angel Martinez 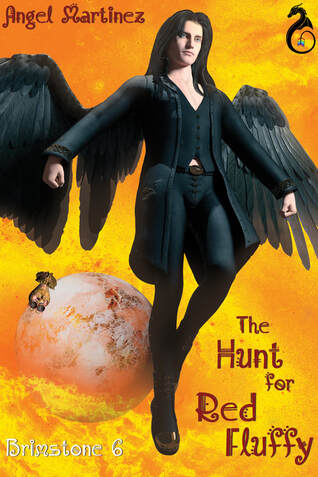 The Hunt for Red Fluffy

When a stray hellcat - a creature only a demon can posses - appears on the station where the Brimstone has stopped, it’s obvious to just about everyone except Shax that it’s a trap, but he takes possession of the beast anyway. Thus begins a quite literal cat and mouse game as the demon prince and his crew try to outrun and outmaneuver the criminal gang out to capture them.

It’s just a few months shy of four years since I reviewed the previous book in this series, Beside A Black Tarn. That’s a long time between installments, so it took me a while to remember who all the players were among the crew of the Brimstone. They’re all back to play a part in this latest episode. As in all of this series, there’s lots of humor along with a roller-coaster adventure.

Front and center for this story are fallen angel Ness and human assassin Julian. Ness is more than a little jealous of Julian’s past with Shax, which was obviously intimate, yet he’s also drawn to the agent, which goes against his feeling that he has to stay true to Shax. It’s fairly obvious from the outset where this will all end up, but it’s fun seeing how the three get there.

While it may be a little uneven and irregular (partly to do with publisher issues, it appears), but it has been a lot of fun. The ending of this installments leaves it unclear whether or not there will be any more adventures in the series. If there are, let’s hope it’s not another four years.

“The Hunt for Red Fluffy” is available from Amazon.