Review - No Fae is an Island by Angel Marinez 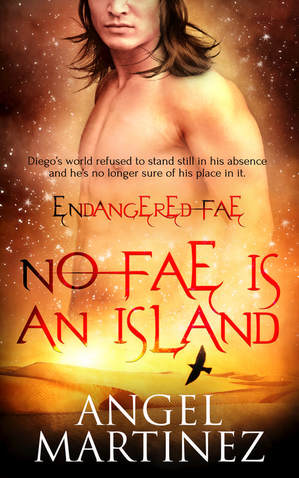 No Fae is an Island

Diego’s three year exile among the “wild fae” of the Otherworld is coming to an end, but as he and Finn prepare to return to the human world, Diego wonders if there’s still a place for him there. They might offer him his old job back as Consul in the Fae embassy, but he’s not sure he wants it. The human world has moved on since Diego was gone. Some countries accept the Fae and magically-affected humans as equals, while others seem them as demons and lock them up, or worse. When a small group of Canadian students is incarcerated by a desert kingdom just a few days after Diego’s return, it seems like a good opportunity for him to do what he does best: meddle.

This fourth and apparently last book of the Endangered Fae series returns the spotlight onto the original two characters, human Diego and pooka Finn. This is, for the most part, the “old” Diego from the first two books, but with the added regrets over what he did in the previous book. Despite the magical background, both Finn and Diego are quite believable characters. The series has definitely taken some risks with these two protagonists, and it’s made for very interesting reading.

A second plot line involves the young vampire Theo from the previous book and a rather talkative selkie. The two make a very curious couple, and their interactions provide much of the comic relief throughout the story. Like many of the relationships that form in this series, it seems like one that can’t possibly work, but you end up wanting it to.

This entire series has offered up a fresh take on mythical and fantastic creatures from various cultural traditions. There have also been some very unconventional plot lines. I wouldn’t say they were all unequivocally completely successful, but all were interesting and unexpected.

“No Fae is an Island” is available from Amazon.