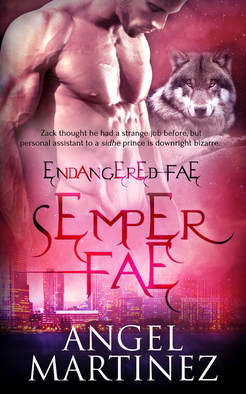 Former marine sergeant Zach is settling into his new role as the chief of security for the Fae embassy to the human world. His main challenge is fending off the advances of the ambassador, Prince Lugh. It isn’t that Zach isn’t attracted to the prince, but the young man is basically a one-man kind of guy, and the Fae aren’t exactly known for monogamous relationships. But things are about to get more complicated, as magic flows back into the human world, resulting in strange happenings and hints of dark forces.

“Semper Fae” marks a significant departure from the first two books of the Endangered Fae series, although another way to look at it is that “Finn” and “Diego” were simply prequels that set up the world in which this book, and presumably the ones to follow, take place. Although Diego plays a pivotal role in this installment, he and Finn are not the main characters. Instead, Zach and Lugh are the key players.

Zach is a hard character not to like. His introduction in Diego established him as a man with a strong moral compass who strives to do the right things. But figuring out what’s right for him, especially when it comes to Lugh, is much harder, and that challenge is a key driver for much of the drama in the story. Despite the strange circumstances he ends up in, Zach still comes off as a quite believable character.

The story line goes out on a bit of a limb with Diego’s character. Fans of the first two books of the series may be shocked at the turn, but it’s an interesting twist that will keep you reading to see how it turns out.

Only a few seemingly significant new characters are introduced in this book, in the form of a human coven made up of young men and women just beginning to discover their magical powers. It’s an interesting group of people that become so interconnected to the existing main characters that it’s hard to see how they won’t play a role in future installments.

“Semper Fae” is available from Amazon.