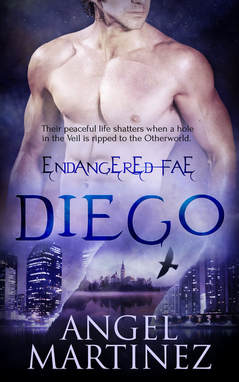 Building a solid relationship between a human and a Irish fairy was never going to be easy. When Diego misinterprets a situation he finds Finn in, his anger opens a hole in the veil which has kept the human and fae worlds separate for hundreds of years. Diego is plunged into a world he has no knowledge, or at least no recollection, of, and Finn finds himself still an outcast among his own people. First, the two have to find each other, then they have to work out their differences, and finally they have to figure out how to get back to the human world, although they’re unaware of what waits for them there.

This sequel to Finn is told in rather episodic fashion. It could probably have been broken up into a series of short stories, although I am glad that it’s a single book. You will see the key dramatic peak of the story coming, and it’s even alluded to in the blurb. It’s a rather standard, even cliché, plot for science fiction stories, with a secret government organization that wants to dissect first and ask questions later. It’s a well-trodden device, but that’s probably in part because it’s so believable. In this case, it’s well written and not really any more outlandish that the rest of the story.

While there are a large number of new characters introduced in this story, it still revolves around Diego and Finn. Diego remains one of the truly good guys. While he gains more access to his magical powers, he remains essentially a good person trying to do the right thing. Finn tries hard to remain the charming rogue, yet is plagued by insecurities about his relationship with Diego. His doubts drive much of the drama of the story line, and while his insecurity seems well founded, it still makes him seem a little too needy at times.

Without giving away the details of the ending, it does seem to draw something of an end to the story of Diego and Finn. However, there are more books planned in the series, and these will apparently focus on some of the other characters introduced in this volume.

“Diego” is available from Amazon.