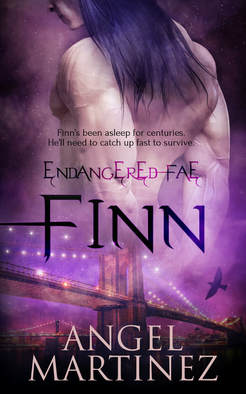 Irish fairy (pooka) Finn wakes from a centuries-long slepp to a very unfamiliar modern world. He somehow finds his way to New York City, which is no place for a being that gets their nourishment from fresh water and nature. He’s weak and disheveled when Diego spots him on a bridge. Diego is someone who just can’t help trying to make other people’s lives better. Fearing that Finn might harm himself, and with no idea what he really is, Diego takes him home. Although both of them have reasons to not be interested in any kind of relationship, a natural attraction forms between them, but how long can it last?

“Finn” is a refreshing modern take on that old theme of love between a magical being and a human, but this isn’t “The Little Mermaid”. The character Finn ends up being quite believable. That’s in part because we get to know him before his true identity becomes clear. You may “know” he’s a fae from the blurb, but that’s not really the same as getting to know the character.

Diego is also an interesting and well developed character. He isn’t your typical flawed hero. Diego’s flaws are that he perhaps cares too much about the welfare of other people. Although it’s a point somewhat subtly made, the story highlights how many people often regard “bleeding hearts” like Diego as weaklings or losers. But it’s Diegos heart as well as his inner strength that ultimately saves both men when Finn unknowingly awakens an ancient malevolence.

The plot follows several well-trodden, even cliché, story lines, yet still manages to breathe new life into them. Finn’s Rip van Winkle back-story provides an excellent way to comment on modern society and technology, as well as a great platform for the author’s trademark humor.

This is the start of a new series, with the second book already announced and due for publication soon, so we’ll soon be treated to more adventures of the pair.

“Finn” is available from Amazon.