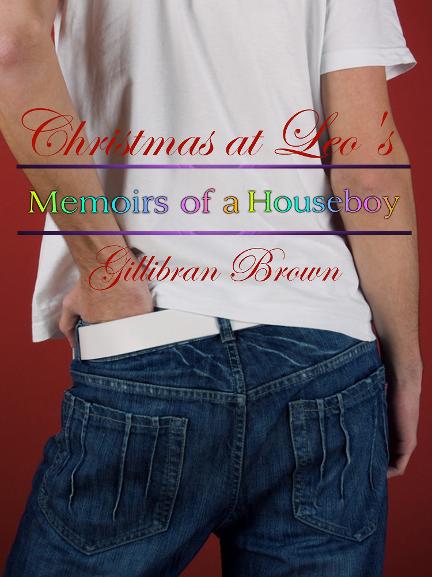 Volume 5 of Memoirs of a Houseboy

The houseboy is back, just in time for Christmas, with another long-time-coming installment of the story of his life with his two “daddies” Dick and Shane. This volume picks up right where the previous book, Gilliflowers, left off, with the story of Christmas 2008. It doesn’t start well, with Gilli visiting his mother. It will probably be her last Christmas, as she is in the final stages of cervical cancer, and it dredges up all sorts of memories in the young man. The memories aren’t really happy ones, and they threaten to ruin Christmas for everyone, as Dick and Shane ignore the houseboy’s pleas to be left alone and instead cart him off to the dreaded Leo’s mansion.

I find I have to drop the usual impersonal veil for this post. Reviews are supposed to be about the book, and not about the reviewer, but much to my surprise, “Christmas at Leo’s” hit quite close to home. Up until now, I didn’t think I had much in common with Gilli. I’m from a different age and different culture, and was never that much of a brat (lie detector says ‘no’) but as he revealed bits of his past and his estrangement from his mother, I came to identify with him much more than I have with just about any other character.

Like Gilli, I was accused of being thin-skinned and overly sensitive as a teenager. I somehow learned how to hide it – it’s not something that goes away – as I got older, which is something Gilli has yet to learn. Unfortunately for the houseboy, not only is he thin skinned, he’s more than a little bit of a drama queen. Rather than let go of the bad memories and perceived slights, or share his feelings with his two boyfriends, he prefers to brood and let them fester. I can also identify with Gilli’s very incongruous feelings of loneliness in a crowd.

Dick and Shane come off a bit more sympathetically in this book. In the previous installment, even allowing for Gilli’s exaggerations, Dick and Shane seem to be rather unfeeling bastards who just keep telling Gilli to “get over it”. In “Christmas at Leo’s” it’s clear that they have a general idea of what demons are eating away at their young pup, but with Gilli unwilling to express what’s going on, they can’t really help him. They’re left to treat the symptoms – his disrespectful behavior and childish outbursts – rather than the root cause.

The book’s title pretty much sums up all that is covered in this installment. We get a rather detailed account of the goings-on over an extended holiday at Leo’s, with his assorted kinky friends, but not much more. Presumably, the next book in the series, ominously titled “Revelations” will finally tie it all together and answer some of the big questions posed by the series. There are a few clues littered through “Christmas at Leo’s” but I won’t spoil anything by telling you what they are.

“Christmas at Leo’s” is available from Amazon