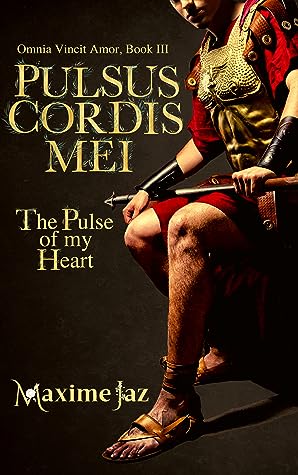 Pulsus Cordis Mei - The Pulse of my Heart

Marius is off to far-away lands, leading Rome's legions against her enemies. But, distance is no barrier to his enemies who don't want to see the general named as heir to the imperial throne. A plot to kidnap Marius goes awry, and he ends up being sold as a slave and transported to a gladiator school in Africa. Meanwhile, Kyle and Claudia struggle to stay one step ahead of the “snakes” who not only want to get rid of Marius, but his son as well. Weaving their way through the maze of Roman politics means dealing with people that both Kyle and Claudia would prefer to ignore.

This final book of the Omnia Vincent Amor series is a bit of a roller-coaster ride as all of the main characters navigate treacherous waters to get back together. Marius sort of loses himself for a while, making the turn of events that land him in Africa even more heart-wrenching. It is quite an adventure, even if it does leave him scarred physically as well as emotionally.

It shouldn't be much of a spoiler to reveal that it's Kyle who eventually tracks down his lover and brings him home. If you've read the first two books (and you shouldn't be reading this review if you haven't), then it's no surprise that Kyle is the real hero of this epic love story. By rights, he should hate Marius and, at the very least, be indifferent to Claudia. More than anyone, Kyle is the one who holds this unusual family together and gives them the strength to get past the setbacks that keep being thrown their way.

The menage that evolved in the second book and is carried over into this final installment is not something I expected when the series started. It is, however, entirely believable in the way it develops and makes the whole tale much more compelling. While the author maintains that these books are not “historical” novels in the traditional sense, they are nonetheless very believable in the portrayal of what ancient Rome might have been like.

In some ways, I could see this story going on, but it would probably degrade into more of the same plots and intrigue, as most series do that go on for too long. That it's been kept to a nice neat trilogy is perfect, leaving enough scope for an epic-scale story without becoming tiresome.

“Pulsus Cordis Mei - The Pulse of my Heart” is available from Amazon.