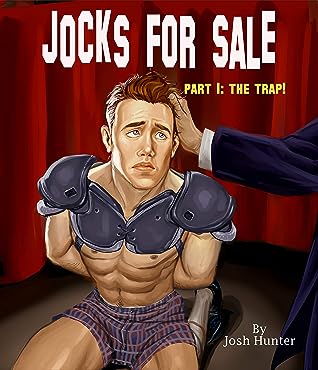 Volume 1 of Jocks for Sale

Part 1 of this 10-part series opens with college jock Conner enjoying spring break in Cancun with three of his fraternity brothers. They're all focused on bedding as many women as possible. Usually, Conner would be too, but he's become fixated on Jake, a freshman from his lacrosse team that Conner has become obsessed with. He's made it his mission to keep Jake from hooking up with anyone, hoping the young man will get desperate enough to let Conner fool around with him. An opportunity seems to present itself when an older woman tries to pick up Conner, and he convinces her to let Jake come along. Unfortunately, lust makes the boys chase after the woman without realizing the trap she's leading them into.

This first installment of a serialized story sets up a world where an international ring of human traffickers specializes in kidnapping and ‘training’ young men to be sexual playthings for the rich and powerful. We get to know Conner and, through him, Jake before the actual kidnapping takes place. They both seem to be believable as typical college jocks. Be prepared for some locker-room language about women and explicit descriptions of straight sex.

In Part 2, straight-identified Conner's training to become a sex slave begins. His trainer turns out to be another captive named Nick. Any hope that Nick might go easy on him is quickly dashed. The trainer has the control for Conner's shock collar, and isn't afraid to use it. Conner, now renamed Cody, learns the hard way that the only way to avoid great pain is to cooperate. His resistance and desire to hang onto his ‘virginity’ is entirely understandable, as is ultimately giving in rather than face the brutal consequences.

“Jocks for Sale — Part 1: The Trap!” is available from Amazon. “Part 2: Training Day” can also be purchased at Amazon and “Part 3: No Way Out” can be obtained from Amazon too.