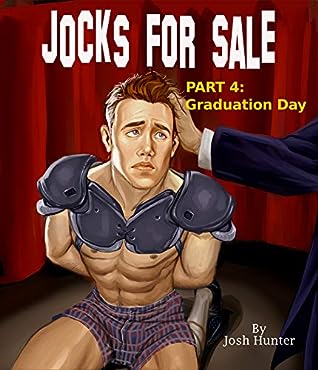 Volume 8 of Jocks for Sale

Cody seems to be enjoying new privileges in Part 8. He's been given the job of training the ‘new boy’ Dane. Dane was a guest of the hotel who managed to insult all the staff and abuse all the slaves with his temperamental, entitled behavior. Little did he know that the visit was all part of his husband's plan to get rid of Dane after he found out the young man had stolen from him, was having an affair with his trainer, and planned to blackmail him. Cody is definitely looking forward to teaching Dane a few lessons on how to behave.

An even bigger challenge faces Cody in Part 9 when he volunteers to ‘break’ Leo, an Australian jock that can't seem to understand there is no hope of escape from the island. Cody has to employ some pretty underhanded techniques to get Leo more cooperative, but will Leo really be able to perform for the boss?

Cody's big plan, along with Leo, to overpower the boss is ready to execute as Part 10 opens. The pair have an opening, but will Cody be able to follow through?

After failing Leo, Cody has a new plan in Part 11, one that might even get him and the other slaves off the island alive and with his brain intact. He also has a new slave to train, and the young soldier might just have skills he can use. However, Cody is frustrated in his attempts to put his plan into action, but when an opening finally comes, he takes it. Will the plan work?

The last installment (Part 11) was just released in August of 2022, nearly a year after Part 10, and it's still not the end of the story. Had I realized the series was unfinished, I would not have started it. Oh well, live and learn. I can't believe I would ever say this about a work of erotica, but the sex scenes which occupy the bulk of this work have gotten a little boring and repetitive. Yes, there are new boys to break and new escape schemes to work out, but it's clear this story needs to come to an end soon.