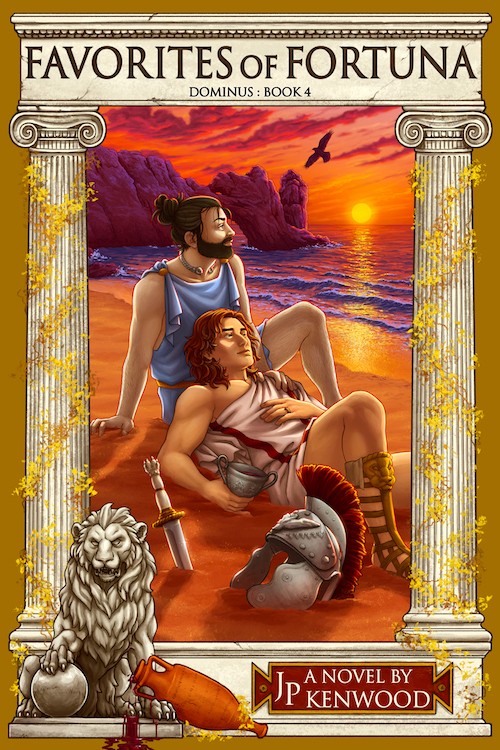 You'd think our two heroes would be happy. Alle is free and back among his people, many of whom expect him to become king when his ailing father dies. Gaius no longer needs to worry about anyone finding out Alle's true identity and can focus on becoming the next emperor of Rome. The problem is that both of them miss each other. When it becomes clear that Alle's destiny is not to be king, he hatches a plan that may reunite him with Gaius and maybe even offer the Dacian prince a chance to kill the emperor.

This latest installment of the Dominus series is rather epic in scale. The two lovers literally cross oceans and deserts to be together again. It's a journey that spans years as well as continents. Even after the Roman general recognizes the disguised Allerix, there are few opportunities for the two to be together. Both become embroiled in the plots and subterfuge that surround Emperor Trajan.

It's been a long wait for this latest volume of the series, and it isn't clear if this is the end for our heroes. In some ways, the final chapters featuring Gaius and Alle feel like a happily-ever-after ending. However, as you should recall from early books, the tale of the two first-century lovers is a story within a story. The wrap-around plot is set in the present day and revolves around the archaeologist who discovers some ancient remains as well as an ornate dagger while digging in Rome. If you've been guessing about the identity of the skeletons, chances are you're wrong, as that mystery is resolved. But there's more intrigue afoot in this story, which points to there being yet more books to come.

We've gotten to know our two main characters quite well by now, and they remain true to form in this book. We definitely get to know Allerix even better, with more than half of the story related from his point of view. Alle is by far the more complicated character, and all that comes across quite well. This doesn't keep us from finding him a sympathetic and very understandable person, despite the vast differences in time.

Gaius remains the model of a Roman patrician who could be emperor one day. Although, it's not much of a spoiler to say that his attitudes and ambitions do change over time as he begins to evaluate what's really important to him. Gaius definitely grows more likable over the course of this book in particular.

It's anybody's guess as to if and when there will be another book, but if there is, I will definitely want to give it a read.

“Favorites of Fortuna” is available from Amazon.