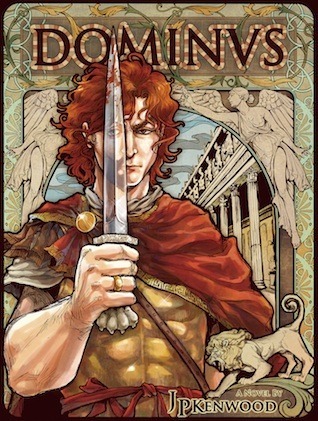 General Gaius Fabius returns to Rome in triumph from the Dacian wars, but soon finds himself restless for a new challenge. Somewhat bored with his current stable of pleasure slaves, Gaius finds his challenge in the form of Allerix, a Dacian prisoner put up for auction. Gaius decides to make Allerix his new boy toy, but taming the young man may be more of a challenge than Gaius bargained for.

The author openly describes “Dominus” as a fantasy set in ancient Rome, and that’s a refreshingly honest portrayal of the story. The historical background of the story feels right, and well researched. The only thing that seems somewhat out of place is the starkly contemporary dialog, but that does serve to make the story much more readable.

Gaius and Allerix are surrounded by a rich set of characters, from Gaius’ other pleasure slaves Simon and Nicomedes, to his friend Lucius and even his wife Marcia. As this is the first of a series of novels, much of this book is devoted to introducing the characters and setting the scene for the later stories. The prologue seems to point to where the plot will ultimately take the main characters, but be forewarned that nothing gets resolved in this volume. It ends, in effect, on a cliffhanger.

It would probably be very fair to say that the emphasis in “Dominus” is on the characters rather than the historical period. Readers looking for a detailed description of the period or commentary on the slave economy of ancient Rome would be better advised to read the works of Clodia Metelli, who also writes steamy stories about the same time frame. However, if you’re looking for a very readable romance set in the Roman Empire, this is certainly a worthy entry.

“Dominus” is available from Smashwords and Amazon

. The review copy of this book was kindly provided by the author.