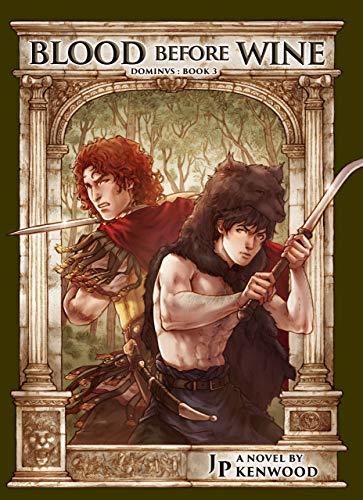 After three months of hard labor in the slave quarters, Gaius releases Alle from his punishment for stealing a dagger, and welcomes him back to his bed. As the two grow ever closer to acknowledging their feelings for each other, it also becomes clear to Gaius that there are people, some of them apparently quite powerful, who know Alle’s secret, and then there’s the emperor himself, who takes an uncomfortable interest in Alle as well.

This third book of the Dominus series focuses even more sharply on Gaius and Alle. There’s not much to move along the mystery of Lucius’ death, although there’s palace intrigue aplenty, and it all begins to seem like part of a grand plot.

Master and slave love stories are always tricky, at least in a historical setting where the slave has generally not entered into the arrangement voluntarily, and whose people may be sworn enemies of their master. That certainly describes this case, where Allerix is a warrior prince of the Dacian people, taken captive and sold to Gaius as a slave when Gaius’ army invaded Dacia. Over the course of the three books, Alle’s initial determination to kill Gaius turns to acceptance that it wouldn’t change anything for his people, and then into strong feelings for his master.

What makes Alle’s conversion convincing is that his attitude doesn’t change completely. He may be falling in love with a Roman, but his hatred of the empire, and particularly the emperor, remains. He is even willing to give up his own life to kill Trajan. But, will he risk Gaius’ life and future to take his revenge when he gets the chance? That question provides one of the more interesting dramatic points of the book.

The laws and customs of ancient Rome always provides an interesting backdrop to master and slave love stories. To our way of thinking, if a master truly loves his slave, then he should set them free, but in those times, while it was fine for a patrician noble like Gaius to share his bed with a slave, it would be a huge scandal if he had a relationship with a free man. Granting manumission to Alle would mean giving him up, not to mention subjecting him to greater danger if anyone found out who he really was. All this is used to great effect in the story.

The ending of this installment is quite interesting. If you didn’t know there was one more book in the series, and ignore the archeological mystery set up by the prologue and epilogue of each book, you might think this was the end of the series. It certainly makes you wonder more about how the next and final book will play out.

“Blood Before Wine” is available from Amazon.