Review - The Wish by Eden Winters 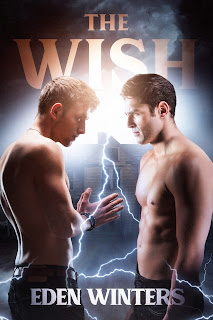 They say ghosts are people who died with unfinished business. Byron’s rather unusual desire is to see his nephew and his partner’s nephew together. The two young men were like sons to the two older men, and it’s both their desires to see Paul and Alex get along. To say it’s not going to be easy would be an understatement. Alex is the very model of an rich entitled young man. He doesn’t much care who he takes to bed, as long as they’re young and pretty, and don’t stay the night. On the other hand, Paul has made his own way and constantly refuses his uncles' financial help.

I don’t read too many ghost stories, and frankly the ghost element of this book is very minor. Indeed, the story could work just as well without the ghost of Byron doing his little bit to get Alex and Paul together. Still, it’s not completely superfluous and is nicely worked into the plot.

When we first meet him, Alex appears to be exactly what you expect. Born into money, he’s never really had to work for anything, and was raised by grandparents who hired other people to look after him, so he’s never really known any love and affection, except from his uncle and Byron. To almost everyone else, he seems irredeemable, but his uncles, who know him better than most, seem to think otherwise. Knowing only people who were out for what they could get from him, Alex’s initial opinion of Paul is just what you’d expect.

Paul is very much the opposite of Alex. In some respects, he’s a little too good to be true. Like the rest of us, he thinks he knows just what kind of man Alex is, and easily rebuffs the other man’s advances, at least initially. Still, he’s kind-hearted enough to look for the good in Alex.

You could definitely describe this as a sort of enemies-to-lovers romance. Paul and Alex aren’t quite enemies, but they do take an instant dislike to each other, based on their own assumptions and mis-conceptions. The turn-about in their feelings for each other is handled quite believably. The antagonism between the two provides most of the drama of the story, and it’s worked into the story line very well, so that it all seems relatively natural. Well, apart from the ghost of Byron.

“The Wish” is available from Amazon.