Review - The Harvest Young: Bound by Destiny by M.A. Church 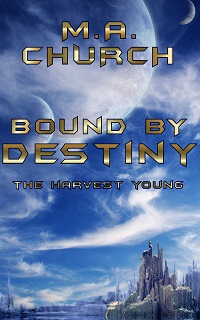 Volume 2 of The Harvest Young

This second book of The Harvest Young series picks up several years after the first book, Bound by Fate. Where Szin was the focus of the first book, his brother Raiden is at the center of this story, along with his mate Dayo. The two young mixed Tah’Narian/human males are both serving on a star ship, and now that their careers are established they’re thinking of starting a family. But a couple of seemingly inconsequential encounters on the planet Quai sets off a chain of events that may destroy the couple’s plans.

As in the first book, the story jumps in right away with very little time spent developing the characters or their world. As unusual as the tactic is, it doesn’t really detract from the story. Instead, it helps set a fast pace for the plot, which has a lot more drama to it that the previous book in the series.

Although there isn’t a lot of background development for the characters, we still get to know them rather well through the course of the story. Raiden appeared in the last installment, along with his brother Szin, so if you’ve read that then you already know him a little. Dayo didn’t have much of a part in the first book, but he shares equal time with Raiden, so he becomes just as fully-fleshed a character. The two are also surrounded by a large number of secondary characters, most of which are new to this story and come across as multi-dimensional people, or aliens, or pan-dimensional beings. There aren’t really any cardboard cutouts in this universe. A particularly colorful non-speaking character is the “guardian” Dayo meets on Quai.

As mentioned above, there’s a bit more ‘real’ drama to this story, compared to the first book in this series. There are times when you’re not sure what the outcome will be for our two heroes. The quick pace along with the dramatic tension makes this a pretty good read. The only downside, and it’s a minor one, is some poor proofing. There a missing, extra, or wrong words every few pages.

“The Harvest Young: Bound by Destiny” is available from Amazon.