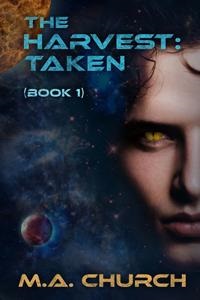 Volume 1 of The Harvest

Note: Those that follow my reviews regularly will probably notice that I’ve already reviewed the follow-on series to this one, The Harvest Young. I didn’t realize when selecting that series that it was closely linked to this one. While not having read “The Harvest” series didn’t detract much from the new series, there were clearly back stories to some of the secondary characters that piqued my interest. Hence, I’m going back to read the original two books.

In the year 2050 humanity finally gets incontrovertible proof of alien life when large ships appear over several major world cities. The ships belong to the Tah’Narians, an advanced race of cat-like humanoids. Although they possess sophisticated technology, the Tah’Narians have lost the ability to reproduce, so they have come to earth to “harvest” young males with whom to mate and have young, after a little genetic modification. Faced with the obvious technical superiority of the Tah’Narians, the world governments agree to set up a lottery to decide which men will be enlisted to go with the aliens when they return each year. Dale is a few weeks below the minimum age of 23 when the current harvest begins, so he thinks he is safe. He couldn’t be more wrong.

“The Harvest: Taken” may sound like a typical kidnapped-for-sex-slave story, but it largely succeeds in being a quite different kind of book. The Tah’Narians really are looking for mates — as in true life partners — and not just brood hens to produce young. Exactly why they agree to the awkward way men are taken is perhaps a bit of a plot hole, but then these days it’s sadly all too believable that our government would go about things in the most ham-fisted way possible.

Regardless of the true nature of the plot, a key issue for many readers will be the believability of the turning point in Dale’s attitude; when he stops railing against the way in which his life has been changed and begins seeing his new mate Keyno as something other than just his kidnapper. I think the story pulls this point off fairly well. Dale resists, argues, plots escape, and goes through all the phases of attitude you would expect, without seeming whiny or like a helpless heroine in need of rescue.

The story is told entirely from Dale’s point of view, and introduces a number of characters that I now know will play parts in both series. There are, in effect, a number of sub-plots in the main story line. While this could potentially be confusing, the threads are woven together quite well, and help to move the whole story arc along at a fast pace. That fast pace has been a hallmark of both series, and while it has made for some late nights from refusing to put the books down, it’s not something I can really find fault with.

“The Harvest: Taken” is available from Amazon.