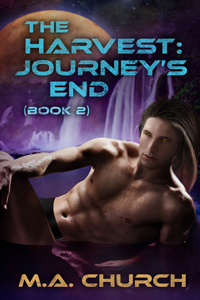 Volume 2 of The Harvest

Dale may be settling into his strange new life with his Tah’Narian mate Keyno after being “harvested” from Earth, but that doesn’t mean his struggle with the changes is over. Without doubt, the biggest challenge of all will be fulfilling the need which caused the Tah’Narians to initiate the harvest in the first place: conceiving and bearing a child for his mate. That need provides the main backbone of the story, but there are numerous other things that happen to Dale and his adopted ‘family’ along the way.

“Journey’s End” picks up right where the first book, Taken leaves off, and sets a blistering pace, in more ways than one. The writing flows easily, and the way the chapters are linked together means this book very quickly, albeit somewhat infuriatingly, becomes one you simply can’t put down.

As in the first book, everything is related from Dale’s point of view. He is quite an engaging character. At times Dale seems a bit more mature than you would expect from a young man in his early twenties, but then something will happen and he will react just the way you might expect someone of his age to act in a difficult situation. It’s all handled in a way that makes Dale more realistic rather than contradictory.

“The Harvest: Journey’s End” is available from Amazon.