Review - There Will Be Aliens by Holly Day 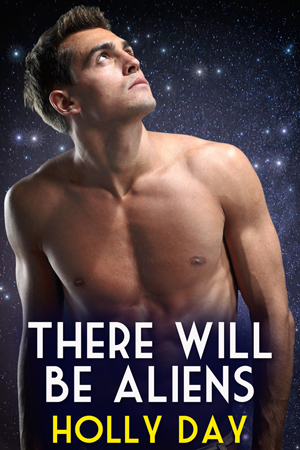 There Will Be Aliens

Carlo and his best friend Grace are having drinks, commiserating over the loss of Carlo's cheating boyfriend. They've had a bit too much to drink, and on their way home they're kidnapped by aliens along with several other earth women. Captain Zenon and his crew have been ordered to bring back some earth women to try and solve their race's reproductive issues. The male, Carlo, isn't necessary but there's something about the man that “Zen” can't resist, even though it makes him uncomfortable.

My kidnapped-by-aliens reading streak continues with this entry. Who knew there were so many, but there is a lot of room to come up with different stories based on that one idea. One of the interesting variations is why, exactly, the aliens are interested in earthlings. In this case, Zenon's people have lost the ability to make or process dopamine, leaving them almost incapable of expressing emotions. That sets up an interesting scenario, where Carlo has a hard time communicating with Zen due to the lack of body language clues as well as the limitations of the translation chip the aliens' scientist has developed.

Carlo is a bit of a cliché young gay man, but still quite believable and a rather charming character. The relationship that develops between him and the alien Zen stretches credulity just a bit, but it's handled well enough so as not to be totally incredible. The attraction between the two has enough bumps along the way to make it realistic when the inevitable finally happens. This is essentially a romance after all.

Zenon is a bit harder to get to know. It's an interesting idea: that a race can “lose” the ability to process emotions, and all the things that fall out from that, like losing interest in having children. It didn't occur to me until I read this, but that's a hard point of view to write, and we do get some of the story from Zenon's perspective. Putting yourself in the mind of someone who can't interpret their emotions is hard. I think the book is reasonably successful in this.

Where the story is less than successful is explaining the alien's plight. World-building is always a tricky thing in science fiction, and the author sets up the right characters and situation where the challenge Zenon's people face could be described without it seeming unnatural, but that doesn't happen. It leaves the story feeling a little less complete than it could be.

“There Will Be Aliens” is available from Amazon.