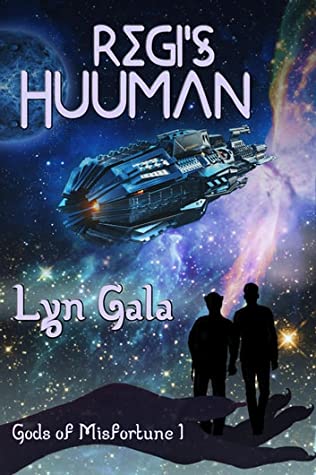 Volume 1 of Gods of Misfortune

Regi exiled himself from the empire where he was raised to join the Coalition, where he is the security chief on board a ship patrolling a relatively empty section of Coalition space. It's usually an uneventful job, but as our story opens, the ship has been disabled and is drifting toward a black hole. The only hope appears to be a pirate ship hiding on the edge of the event horizon. Upon boarding the ship, the only survivor seems to be Dante, a previously unknown species he says is called ”huuman.”

“Regi's Huuman” is a curious story. There seems to be a connection between Regi and Dante, but it wouldn't be accurate to call this a romance, yet. One suspects it's a slow-boil relationship that will come to fruition in the next book of the series. What we're left with is a sci-fi space opera where two misfits somehow find each other and set off on an adventure together.

The story is told entirely from Regi's point of view, so we get to know him rather well. His people are technologically much more advanced than the Coalition races, yet they cling to a belief system that includes a pantheon of gods and goddesses who watch over his people. These beliefs are looked down on by most of Regi's crewmates, yet as the story unfolds, he can't help but conclude that one of his gods has taken a particular interest in him, which makes things complicated.

We only get to know a few bits and pieces about Dante. He was taken from Earth, enslaved by the pirates, and treated rather badly. He seems like a nice man with lots of southern charm. He also makes it plain that he's gay, which is why it seems likely that Dante and Regi will get together at some point.

Regi's crew makes for a colorful cast of supporting characters. There are some often humorous exchanges between them that lightens the story quite a bit. More laughs come when Dante uses American euphemisms that don't translate well to the alien's language.

“Regi's Huuman” is available from Amazon.