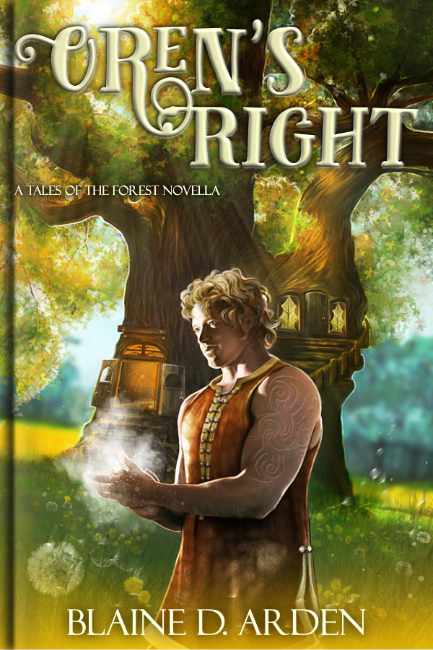 Volume 4 of Tales of the Forest

Forester Veld has been enamored of baker Oren for a long time. But Oren was bonded with Haram, and the healer didn't share, so Veld did his best to remain just friends with both of them. When Haram is killed in an apparent hunting accident, Veld wants to be there for Oren but also needs to respect the customary mourning period. However, that becomes quite difficult when it's clear that the villagers don't understand the unique nature of the relationship that Oren and Haram had.

“Oren’s Right” is set in the same fantasy world of magical elves as the first three books of the Tales of the Forest series but features different characters in a different village. You could, in theory, read this story without having read the initial trilogy, but you would be missing out on some helpful context about the roles some elves play in a village, like Guide and Truth-seeker.

The story is told from Veld's point of view, so we get to know the mute baker Oren through him. We get to know the forester rather well as he relates how he came to the village and decided to settle there, despite being from a very different culture.

This book introduces a bit of kink to the series. It's a bit coy about the details at first, but it's clear early on that Oren was a submissive to his dead partner's dominance. His need for a firm guiding hand, and the villager's misinterpretation of what Haram did to Oren, are the main drivers of the story, along with the mystery of how his former master was killed.

“Full Circle” is available from Smashwords and Amazon.