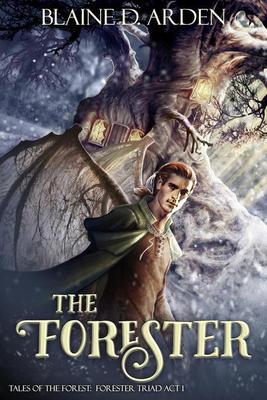 Volume 1 of Tales of the Forest

A beloved elf is found strangled in the forest, and it's truth-seeker Kelnaht's job to find out who is responsible. Fingers are already pointing at the shunned forester, Taruif, but there's no evidence of the elf's guilt and Kelnaht doesn't want to believe it. He's been harboring feelings towards the forester for a while, but that's not something he can admit to anyone, since even talking to the elf is a crime. When it turns out that the forester may have actually been a witness to the crime, Kelnaht is given permission to talk to him, and then things get complicated.

“The Forester” was originally published quite a few years ago, but escaped my attention then. The entire series appears to have been recently re-release, garnering new reviews, so I decided to give it a read. There isn't really much world-building in this short novella, but it's set in a familiar fantasy world of elves and magic. The entire story is related from Kelnaht's point of view. It's a bit hard to relate to an elf with magical truth-seeking powers, but Kelnaht is definitely a plausible enough character.

There are two other characters who will apparently be central to this trilogy. One is the forester, who we get to know a little about, although why he holds so much power over the other two is still a bit of a mystery. We at least find out the gist of why he is shunned, making his relationship with the other two so problematic. The other man in Kelnaht's life is Ianys, his former lover who left him for a woman, who bore him a child. The truth-seeker still stings from the betrayal, yet finds it hard to hate the man.

“The Forester” is available from Amazon.