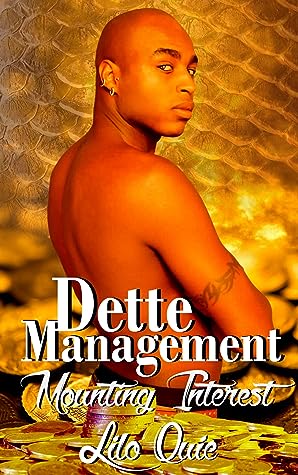 Rama is a young dette from the sub-continent who is raised to be submissive and obedient for any drake he is ultimately paired with, but he's promised to be pampered as the precious treasure that dettes are. However, after his first heat, his father ‘trades” him to an American dragon in exchange for a dowry of land for his brother in the new world. It turns out that the drake isn't what Rama expected, and he spends 40 years isolated from the world under his drake's thumb, bearing him no pups at all. Eventually it comes to light that the dragon didn't even have the right to give the land gifted to Rama's brother. Fortunately, five drakes show up and put things right. Will they be the kind of mates that Rama yearns for, and will they accept a dette who might not give them pups?

This second book of the Empty Nests series is more of a backstory to the first volume, Deep in Dette. There's only a tiny bit of overlap between the two books, so in theory you could read this story without having read the first, but it's probably not a good idea.

The whole story is related from Rama's point of view. He definitely comes across as a sweet young man who gets treated very badly, and in some respects is let down by those that should be looking after him. His transformation from a timid, submissive boy to the confident ‘prince” one of the characters sees in him is fun to watch, but not without a lot of twists and turns. If you have read the first book, then you're prepared for a smart, feisty and demanding dette.

We don't get to know the five men Rama (now Ryan) takes on as mates all that well, although there is a very solid attempt to make them real-enough individuals. Like the first book of the series, you aren't going to get a lot of detailed character development, but you are going to get a rich set of diverse people coping with all the twists and turns that life throws their way.