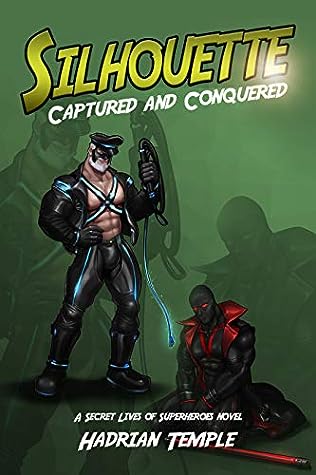 Volume 1 of The Secret Lives of Superheroes

Dr. Inevitable is an arch-villain. He doesn't have any super powers but he does have a very keen intellect, with a particular ability to understand the psychology of people who take his interest. Right now, a vigilante called Silhouette definitely has his interest, so Dr. Inevitable begins laying plans to capture the masked crime fighter. But the doctor doesn't just want to beat Silhouette, he wants to own him and make him a sexual plaything.

The book is narrated entirely from Dr. Inevitable's point of view, which is a bit of a departure from stories where things are told primarily from the “hero's” point of view. The good doctor is definitely a bad guy. He robs banks and does a lot of other things to get his hands on enough money to support the lifestyle he's become accustomed to. However, he isn't evil, per se. As he takes pains to point out, he takes the time and effort to ensure his henchmen are well trained and looked after, especially if they're injured doing his bidding.

Since we only get to know Silhouette from the doctor's point of view, we don't get to know him as well as his nemesis. We can only guess whether or not Dr Inevitable's assessment of him is true by what happens. If you set aside the superhero angle, this is fundamentally a story about domination, so the point of view makes sense viewing the tale as a Dom in search of his perfect submissive. Someone who needs the kind of attention only the Dom can provide.

“Silhouette: Captured and Conquered” is available from Amazon.