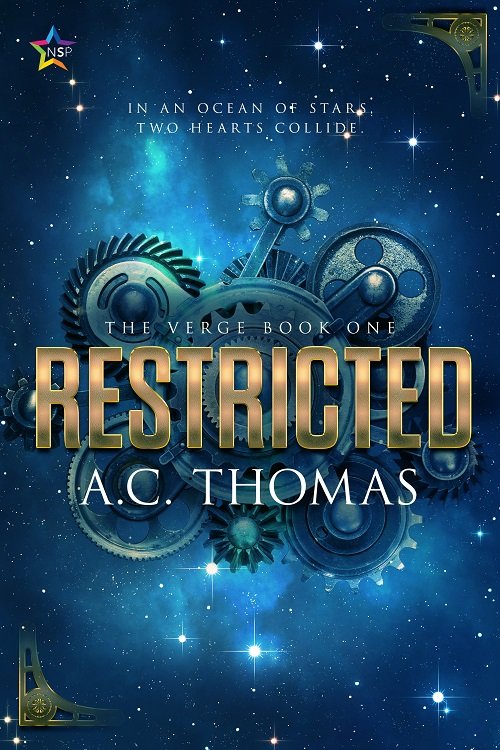 Volume 1 of The Verge

Doctor Aristotle ‘Ari’ Campbell is a scientist from the Core world of Britannia. As such, he's more used to the ivory towers of academia than the rough and tumble worlds on the Verge, where a barrier supposedly keeps out the ruffians of restricted space. He's only there because he's desperate to find his kidnapped twin brother Theo. To help him navigate the Verge and the restricted space beyond, Ari enlists the aid of Orin, a down on his luck pilot in desperate need of work and a ship.

“Restricted” is a rollicking sci-fi adventure with a steampunk bent. Ari is a rather foppish Victorian-styled gentleman who definitely meets his match in the street ruffian Orin, who turns out to be a quite gentle giant, at least where Ari is concerned.

The narration is effectively third-person, which is getting a little unusual these days, but it spends enough time focusing on the two characters for us to get to know them quite well. Ari initially seems like a complete fish-out-of-water, with his fancy clothes and cultured speech, completely at odds with the rough and tumble worlds of the Verge. However, he's probably not as soft or as innocent as Orin may think.

Orin is quite the contradiction from the very beginning. He's described as a very large man with a somewhat brutish appearance. Someone you definitely don't want to mess with. Yet he talks to Ari in the sweetest way from the start, using endearments and nicknames. The two together make quite a pair, even if they initially rub each other the wrong way.

It's pretty obvious from the start that Ari and Orin will get together. It's only a matter of how long it takes.

“Restricted” is available from Amazon.