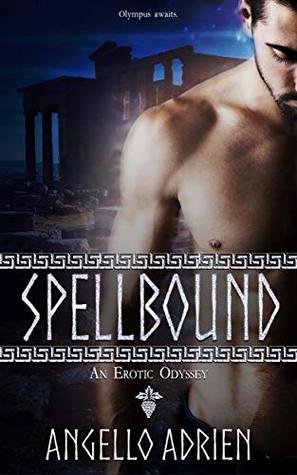 After a bad breakup with his closeted boyfriend, college student David falls into a deep depression that gets so bad, his best friend suggests he needs to get away on some adventure, so he packs a bag and heads off to a Greek island, the ancient home of Dionysus, and more recently the scene for the movie version of “Mama Mia” for a two week vacation. What David finds there, and who finds him, will change him forever.

“Spellbound” is an interesting fantasy story. If you like Greek mythology, you’ll probably like this tale. The story structure is interesting in itself. It starts with David’s return from his unexpectedly long vacation, and his subsequent efforts to pick up his life where he left off. The events that happened to him while on the Greek island are recounted in journal entries as David tries to make sense of it all.

Given the sub-title, I was probably expecting things to get heated quite quickly. Instead, it’s a rather slow build-up to David’s eventual “liberation”, although freedom comes to him at a cost. The use of the term odyssey is quite apropos, as David’s journey takes many twists and turns, not all of them pleasant. Given the many ups and downs of the plot, the happily-ever-after ending is a little bit of a surprise. It’s what people want these days, but I was definitely prepared for something a little more bittersweet.

David is an entirely believable character. Despite finding himself in some rather extra-ordinary circumstances, he reacts in ways you would expect. David’s circle of friends, including the former boyfriend who dumped him, all come across as fully formed characters. The mysterious Stavos is quite believable. You’ll probably guess who he really is long before David figures it out.