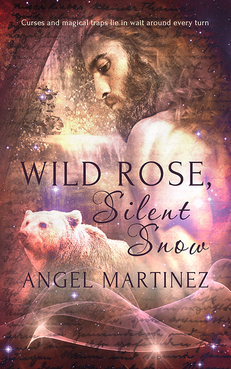 Rowan and his brother Snowden live on an island in one of the many lakes of (one presumes) Minnesota. The twenty-something fraternal twins are on their own since their parents died. With minor but none-the-less limiting disabilities due to a childhood bout with encephalitis, they rely heavily on each other. With few resources, the dead of winter can be trying but they still manage to get by. Things go from grim to weird when a large grizzly bear that seems eager for human companionship shows up.

“Wild Rose, Silent Snow” is a very modern fairy tale. It’s not a direct retelling of any story you may remember from childhood, but there are shades of “Beauty and the Beast” as well as “Rumpelstiltskin”. While using classic fairy tale elements such as magic and enchantment, the story depicts them in a completely contemporary setting, making much easier to lose yourself in the story.

The story is mostly told from Rowan’s point of view. He is quite a likable character, even if he is a bit of a chatterbox as well as one of those people who remains cheerful despite life dealing them a bad hand. His brother Snowden is a little more of an enigma, in part due to his disability. However, much of the book is just the two young men interacting, so we still get to know them both rather well. The bear is a third character and a rather interesting one.

The magical fantasy elements of the story are introduced gradually, making it that much easier to let yourself slip into the fantasy. That, along with a writing style that doesn’t take itself too seriously makes this a fun winter read.