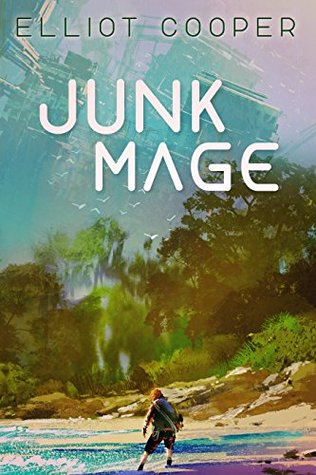 Techno-mage Quillian has a big problem. Well, actually, he has a lot of problems, but the one occupying him at the moment is his ship, appropriately named the Lemon. He’s crashed on a strange planet and is badly in need of materials to repair his craft. He finally finds a junkyard that seems to offer everything he needs, only it’s guarded by a cyborg, Hunter, who doesn’t seem willing to part with any of his mistress’ property.

“Junk Mage” is a long-ish short story, amounting to around 50 pages if printed, yet the author manages to tell a fairly complete story in the space of just a few pages. Quillian is quickly painted as a charming rogue, immediately likable, at least until he tries to borrow money from you. The writing makes good use of brief scenes of dialogue between Quillian and others that give us more insight into his character as well as move the story along.

In a curious yet very believable twist, Hunter, as a cyborg, is a man without a past. We eventually get to know a little about how he became the guardian of the junk yard, but otherwise he’s a bit of a blank slate. However, he’s still a very sympathetic character in the end, and you really hope he will make the ‘right’ decision when it comes to figuring out which side he wants to be on.

I finished the book in a single session, and while it could have been longer, it was still a satisfying short read. The story has a beginning, middle and end, with enough character development to develop your interest and keep you reading.

“Junk Mage” is available from Amazon.