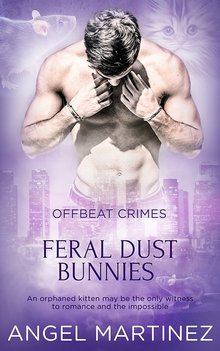 This fourth book of the Offbeat Crimes series puts the focus on Wolf, the 77th precinct’s not-werewolf. Although raised by humans, Wolf still has a hard time understanding the subtilties of the world he was thrust into, especially relationships. He is effectively pansexual. Like most canids, Wolf follows his nose, and animal control officer Jason Chen smells good enough to make Wolf forget how to human. The two are thrown together frequently on Wolf’s current case, which involves the discovery of several desiccated small animals around town. Their only clue to the mystery is the lone survivor: a small kitten that seems to have imprinted on Wolf.

Wolf is definitely an interesting character. Through him we get a sometimes humorous look at the complexities of human society as seen from something like a dog’s point of view. He is surprisingly believable and we get quite a bit of his back-story as he gets to know Jason.

The police case seems to take a back seat to the romance in this installment of the series, but it’s worth noting that together with the last book, there’s a strong suggestion that the serious threats the officers have faced are connected. A malevolent force seems to be targeting the officers of the 77th, so you’ll definitely want to stay tuned for the next episode.