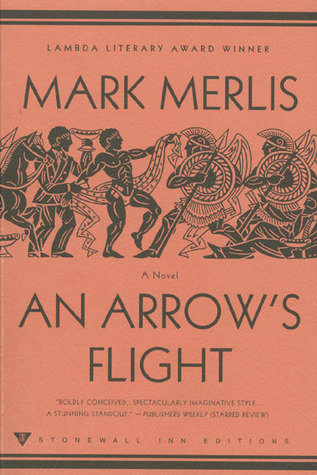 In the old legend of the Trojan war, Pyrrhus is the son of Achilles. After the death of his father, Pyrrhus is drawn to Troy and plays a part in the ultimate fall of the city. This retelling of that chapter of the classic tale sets the story in recent history and translates many elements of the story into cultural terms that almost any reader (especially gay ones) will understand.

Bored at home, even as a prince, Pyrrhus runs away to the big city, where he makes ends meet as a waiter, hustler, and even a go-go boy dancing on a bar, which is where his father’s old retainer Phoenix finds him to tell him about his father’s death and to try and lure him to Troy.

Although recounting how Pyrrhus came to be dancing on that bar where Phoenix finds him takes up a good portion of the book, it’s really just setting the groundwork for the rest of the story. The young man is faced with some hard questions about what he really was running away from, who he is, and even what role destiny really plays in our lives.

I’m not usually one to re-read books. There are too many new ones to discover to spend time going over ones I’ve already enjoyed. When this one came up for discussion at my local book club, I thought I would just skim through it to refresh my memory. However, I found myself finding new pleasure in reading this again, probably more than ten years after the first time. Part of it is that I’ve read a lot more stories about Achilles since then, such as Song of Achilles. I’m also older and perhaps in a better position to enjoy the often biting commentary on gay culture.

“An Arrow’s Flight” is an ambitious work, attempting to put classical Greek myths into a contemporary setting. There are a few anachronisms, and it does falter at times, but you can forgive the few stumbles because the whole works remarkably well. Don’t get hung up on the time period and you’ll probably enjoy this read.

“An Arrow’s Flight” is available from Amazon