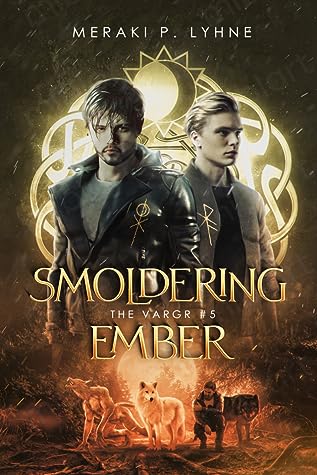 Volume 5 of The Vargr

Kindly note: This series is very much meant to be read in order. If you haven't yet read the previous books of this series, this review may contain spoilers about how they turn out.

Matt's life gets even more complicated now that he's confirmed to be the new incarnation of the legendary warrior Sköll. The biggest challenge is the circumstances of his rising, having been bitten by a Völsung, the enemy he is destined to fight. Fortunately, the young man isn't alone. He has the three other risen wolves, which includes his mate Hati. Then there's Rasmus, Matt's boyfriend. Balancing his human and wolf sides may be the hardest thing to do.

This installment of The Vargr series deals with the aftermath of Matt's kidnapping by a Völsung pack, which resulted in his rise from the warlord's bite. Sköll's appearance confirms that a war is coming that could envelop not just the vargr, but humans, cubi, and other children of the gods. Fortunately, open warfare hasn't broken out yet, which allows the packs time to sort out their own internal challenges. It also gives Matt and his mates time to work through their own increasingly complicated relationships.

Matt remains at the center of all the action, although he's not the only one whose relationships are getting complicated. The series has now set up an interesting challenge for the young alphas. The ‘mate’ their wolf side chooses to bond with is not the same person their human side wants to be with. That's making for some interesting conversations.

We see even more of the cubi in this volume as well. All of the key characters from that series are now taking part in this story. You can still read these books without having read that series, even though you may not know who Daniel and the others are. You'll only be missing a few nuances about the race of succubi.

“Smoldering Ember” is available from Amazon.