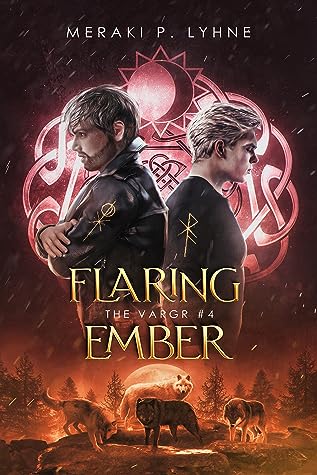 Volume 4 of The Vargr

Kindly note: This series is very much meant to be read in order. If you haven't yet read the first books of this series, this review may contain spoilers about how they turn out.

After taking a year off from school to settle into life with the pack, and all the things that happened, Matt is looking forward to going to college, living the life of a normal student. Of course, things don't quite work out that way, and the growing threat of the Völsung to the Vargr packs shows no sign of abating. Matt even ends up meeting some of the wolves who live in the shadows, and that can't be good.

The epic story of the ancient race of “werewolves” who live in packs without much of the outside world knowing continues to unfold in this fourth book of The Vargr series. Matt remains the center of the plot, as the presumptive inheritor of the role of Sköll from the pack's legends of a battle more than a millennia ago. It's a lot of responsibility for a young man not yet 20 to bear, but Matt has his boyfriend Rasmus, his alpha “mate” Hati as well as his mentors Pack Alpha Steffen and Steffen's lover Regional Alpha Tristan.

Matt continues to grow and mature beyond his young age. As in the previous series set in the same world, The Cubi, there's a coming-of-age element to the books in this series, as the central character is suddenly faced with responsibilities well beyond his years. Matt seems real enough, even if at times he's almost too good to be true.

While this series has an almost-zero heat level, especially compared to The Cubi series, there is still lots of thought-provoking situations about love and potentially “complicated” relationships. Matt and Rasmus have been boyfriends almost from the moment they met in the first book, yet in the last book it turned out that Matt's Vargr half was probably bonded to Hati. For his part, the straight-identified Hati had a girlfriend before he came to live with Matt's pack, and he misses her a lot. In this installment, the two young men begin to question whether or not they can have their “human” relationships in addition to their Vargr ones, and how that would work. It's all part of a larger conversation the entire pack has to engage in when the Cubi offer their help to defend against Völsung.

It's a bit of a spoiler, but if you've been reading the series, which of course you need to before you read this book, then it might not be too much of a surprise that an event teased through the last two or three installments finally happens. Exactly how it happens is still a bit of a surprise until it gets close to the event. In some ways, this could have even be the final volume of the series, but of course this is really just the beginning of a whole new phase of the over-arching story.

“Flaring Ember” is available from Amazon.