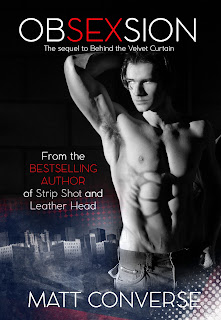 Volume 2 of Behind The Velvet Curtain

Michael has retired his “Matt Jaxx” stripper persona and now lives in domestic bliss with his boyfriend Justin. But life isn’t perfect. Michael is still plagued by nightmares of the deranged stalker he dubbed “The Creeper”. He just has to console himself that his attacker is safely behind bars. When Justin gets a gig modeling in Paris for six months, both men wonder what it means for their budding relationship, but agree it’s too good an opportunity for Justin to pass up.

Note to self: Always read reviews of the previous books in a series before deciding to read a new installment, to see if you enjoyed the past books. I didn’t remember Behind the Velvet Curtain being that bad a read. A bit of fun if not very profound, and to be clear, this book isn’t bad. It just didn’t work for me, on many levels. The chapters read as a series of loosely connected vignettes, some of which don’t seem to have any point, and the time line of the plot feels off, like some of the chapters are out of order.

Several of the chapters recount in detail Michael’s nightmares about The Creeper. I think they’re meant to heighten the suspense, but they didn’t succeed with me. One of the most common, almost cliché, advice to writers is “show, don’t tell”. I’m the camp that believes that’s not as hard a rule as some others make out, but in the case of this book, there’s far too much “telling” for me.

The dialog is also often unnatural and even stilted. The final scene between Michael and Justin is particularly eye-rolling.

“Obsexsion” is available from Amazon.