Review - The Lodger, That Summer by Levi Huxton 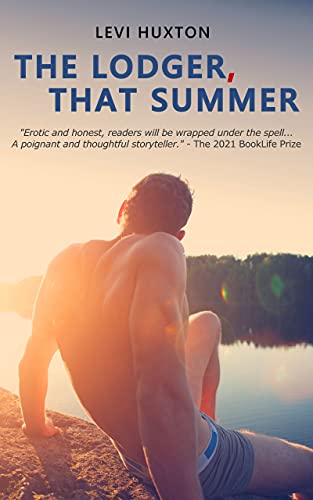 The Lodger, That Summer

James, along with his twin sister Eve and their father Frank, is still grieving over the loss of their mother, Frank's wife. Each is coping in their own way, and soon the twins will be off to college, which is an added concern for everyone. On a whim, Frank invites a virtual stranger to stay in one of the spare rooms of his home. Cary introduces himself as a personal trainer working at a local gym. He's new in town and looking for a place to stay. Cary seems to be an affable, and even charismatic, person, with his blond surfer looks and easy-going personality. As more guests join the group for the Christmas holidays, there seems to be several people with designs on the young man, in one way or another.

“The Lodger, That Summer” is a curious tale. It's not a romance by most current standards, and it's unusually structured. We get several chapters in a row from each of the different men's point of view. James, Frank, his best friend Mack and his son “Lacky” all tell parts of the story. Their sections overlap a bit in time, and they all have their own encounters with Cary over the course of the story.

We get to know the four men relatively well as each tells us their parts of the story. Cary, however, remains something of an enigma. He doesn't reveal much about himself in any of his interactions with any of the other characters. Cary is clearly attractive to both the men and women gathered in Frank's house, and he's more than willing to participate in whatever sexual escapades are on offer.

While there are four men, and a couple of women, orbiting around Cary, James is very much the main character, the one most affected by Cary's presence over the course of the story. In that respect, you could definitely regard this as a coming-of-age story, as James comes to terms with his own desires as the book concludes. In fact, all four of the men we hear from have a coming to terms of some sort, so maybe this is a new genre, the coming-to-terms novel.

There is some exceptional writing in this debut novel, with some vivid scenes, usually involving insights into James' evolution over the events of the story. As a debut novel, it's quite impressive.

“The Lodger, That Summer” is available from Amazon.