Review - The Master Will Appear by L.A. Witt 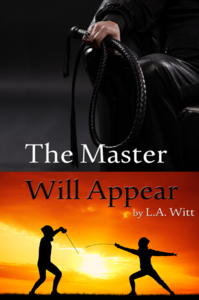 The Master Will Appear

Experienced fencer Mikhail takes an instant dislike to brash newcomer Ryan. The aggressive young man has talent, but no discipline. And if there’s one thing Mikhail knows, it’s discipline, whether it be on the piste or in the bedroom. Mikhail decides to teach the cocky fencer a lesson and challenges him to a match. He isn’t surprised when he wins easily, but he is surprised when a contrite Ryan asks Mikhail to give him lessons. It turns out the dislike is mutual, but so is an attraction each man finds hard to resist.

“The Master Will Appear” is a rich blend of complex characters and unusual plot elements. The age gap is just one aspect of the story that is rarely seen in gay romance. Dysfunctional families are common enough, but rarely are they depicted in any depth or with much realism. Ryan’s entitled well-to-do parents are sadly all too believable in today’s world. It was also good to see a story where all of a character’s problems don’t simply go away just because he meets the right man, or Dom.

The choice of the fencing world as a backdrop was another unusual choice. I have no idea how accurately it is depicted, but it certainly seemed believable. It was also interesting to see how the tension between Ryan and Mikhail remains on the piste even after they get together.

Perhaps what I like most of all about this book is that it has a beginning, middle, and end. Unlike so many books today, “The Master Will Appear” is clearly not part of a series, at least not one with the same characters. I can understand the business reasons behind the preference for series, but all too often a potentially good story line is ruined by trying to shoehorn it into a series, or worse, a good ending is butchered in the last few pages to leave an opening for a sequel. It may make business sense, but it makes for a bad reading experience.

“The Master Will Appear” is available from Amazon.