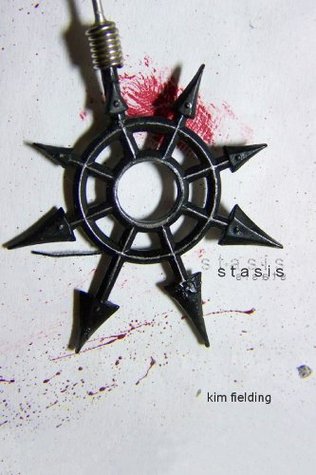 The powerful city-state of Praesidium considers itself more civilized than its neighbors. Rather than kill their most dangerous criminals, the rulers and the wizards who serve them put the men in stasis, a sort of suspended animation, for decades or even centuries. Once they’re awakened, the convicted then serve out long terms as slaves. When his father the Chief takes Ennek’s older brother “Under” to see the prisoners in stasis, the young boy convinces them to let him come along. The sight of the naked, not-quite-dead but not-alive man they are shown disturbs Ennek. When he returns Under on something of a dare to show off the men in stasis to another young boy visiting from a neighboring city, Ennek gets an even bigger shock when he encounters a different prisoner, one who seems caught between life and death.

As a younger son, not much is expected of Ennek, and he leads a rather dissolute life, in part because he is haunted by thoughts of the prisoner he encountered Under. The man seems to haunt his dreams, demanding his help. Ennek finally resolves to do something, but in attempting to rescue the prisoner from Stasis, he ends up effectively making a deal with the devil. Extricating himself and the man he wants to rescue from the tangled web of intrigue around him proves to be Ennek’s biggest challenge.

“Stasis” is a curiously pleasant tale. The curious part comes from the way the story line defies easy description or pigeon holing. That this is, broadly, a fantasy tale there can be no doubt, but beyond that it gets complicated. Magic plays a big part of the story, but unlike many books involving magic and wizards, magic isn’t used to suddenly help someone do the seemingly impossible. In fact, magic is more the barrier than the solution to our hero’s problems.

Then there’s the romance aspect. There’s definitely an attraction between Ennek and the prisoner, but it remains unexplored and almost unspoken until almost the very end. It’s a curious ‘romance’, but in the circumstances the characters find themselves in, not an unnatural one.

All this makes the book a bit different, but there’s nothing wrong with that. This is the first of three books featuring Ennek and his adventures.

“Stasis” is available from Amazon