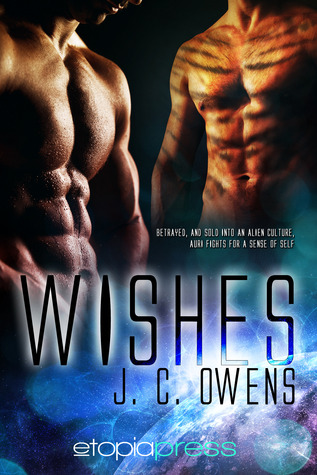 Auri is a young man determined to go places. He has risen through the ranks in the service of the Empire without the aid of any family connections, and now he is a first lieutenant on a diplomatic starship. Auri has gotten where he is by being stern and demanding. He gets things done. But there’s nobody on his current assignment that he can call a friend. Even his own captain thinks he is a little too uptight.

As “Wishes” opens, Auri’s ship has just received orders to take a diplomatic mission to Felin, a world occupied by a feline species that are considered barbarians by the empire. Auri has heard stories and rumors about the Felin’s taste for humans, which, the rumors go, serve as slaves, so he is quite disturbed when he finally meets up with the cat-like humanoids, who seem to show an interest in him.

Auri will be relieved when the mission is over. There’s just one more task to attend to, the signing of the agreement, and then they can leave. Only, it turns out that the young man is part of the deal. The diplomats have agreed to give Auri to the Felin king, without consulting with the young man. Auri is informed he is now the mate of the cat, and left there.

This is the third book I’ve read by J.C. Owens, and there’s definitely a pattern to this author’s stories, or at least the ones I’ve read. Chief among them is the theme of a young man taken - both physically and sexually - against his will, at least at first. Over time, of course, the man overcomes his fears and grows to love his captor. Put like that, and without the overlay of fantasy, there’s something a little creepy about the plot. But this is fantasy, and Owens delivers a believable story as Auri comes to terms - eventually - with his situation.

The author does a really good job of painting a picture of Auri as a young man who has a lot to overcome, mostly within himself. To get as far as he did in the military, he had to build strong walls around his heart and his feelings, not trusting anyone. In the new situation he find himself thrust into, he needs to tear down those walls and learn to trust those around him. I found myself identifying with Auri a little more than I expected.

On the whole, this is a good story, well written. There are places where there is a lot of ’telling’ us what Auri is feeling, rather than showing us, but it always seems to stop short of being tedious. However, since the young man is isolated and not one to share his feelings, there really isn’t another easy way to show us what he is thinking. This was a fun read, if nothing too deep.

“Wishes” is available from Amazon