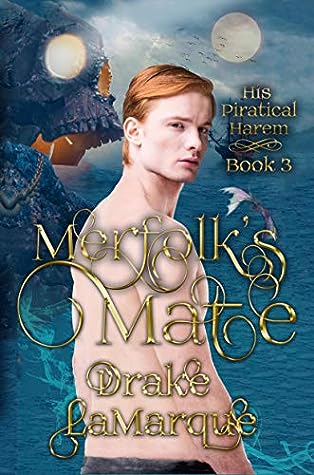 Volume 3 of His Piratical Harem

Warning: If you haven’t read the first books of this series, there may be some spoilers in this review of the third.

In this third installment of the His Piratical Harem series we pick things up right where the last book left off, with Gideon separated from his lovers, whom the navy think have abused the young man. It’s up to Gideon to figure out how to fix things. Along the way he meets Zack, an naval ensign who isn’t what he appears to be, and Gideon also begins to understand what his magical powers can do, which isn’t necessarily good news to him.

As you could probably guess from the title, the gender-bending mer-person Ora features a bit more prominently in this volume of the series. He and Gideon end up having a few scenes together, and those end up going places you might not expect. Ora is an interesting character. “They” are always referred to in non-binary language, seem to present as male, but prefer dresses to pants. More interestingly, while they definitely display a gentle side with Gideon, it’s also clear there’s a savage side to them that doesn’t take much to bring out. The most surprising scene between Ora and Gideon is one where the mer-person displays a bit of a taste for kink as well.

The crew of the Grey Kelpie seem to be sailing into danger in yet another slightly cliff-hanging ending of this book. The next installment appears to be the last of the series, in which the conflicts keeping our cabin boy and his lovers on the run get resolved. It will be interesting to see how Gideon’s new found powers come into play, and whether the dreams he recounts in this story come true in the next.

“Merfolk’s Mate” is available from Amazon.