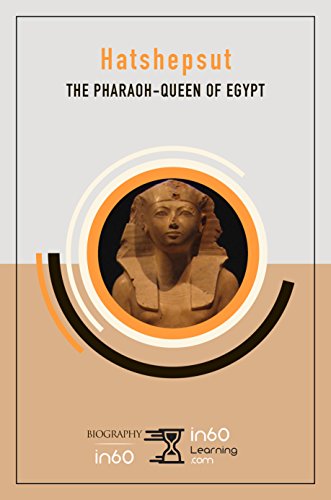 Hatshepsut is a figure that's always fascinated me, although she is probably not widely known, so when I saw that in60Learning had a book about her, I decided to use it to learn a little more. She ruled Egypt around 1479 to 1458 BC and is from the line that gave us Tutankhamun. The popular headline is that she was the first woman to rule as Pharaoh in ancient Egypt, but one of the big revelations of the book is that this is not exactly true.

In fact it was not unusual for a woman to rule as regent to a young pharaoh who was not of age when his father died. In a time when many people died well before their 40th birthday, such a situation would have been relatively common. We know of several cases of this before Hatshepsut's reign and more cases afterwards. In most of these situations, the woman was the queen and mother of the young pharaoh. What made Hatshepsut unusual is that she was Thutmose III's aunt, and step-mother, rather than is birth mother.

Hatshepsut also depicted herself as pharaoh more than any of her predecessors in the role, although almost always along with Thutmose. She undertook a monument-building program that wouldn't be rivaled until the long reign of Ramses II around 200 years later. Her sublimely beautiful mortuary temple set into the face of a cliff at Dier el Bahri is probably one of the main reasons she is known to us. Hatshepsut also seemed to be a consumate diplomat, achieving new trade routes and good relations where previous rulers would have gone to war.

This book definitely fulfills the serie's promise of providing a precise overview of an historical subject. Unlike the Alexander biography I reviewed before, this book is not a chronological overview. That's probably in part because the exact order of events is hard to establish. So much of what we know about ancient Egypt is pieced together from fragmentary evidence, and in Hatshepsut's case it's made even more difficult because Thutmose III obliterated her name from many of her public monuments after her death.

The one problem I had with this book is the rather odd punctuation. Several misplaced commas and other proofing errors make reading this work a little more difficult than it should be.

“Hatshepsut: The Pharaoh-Queen of Egypt” is available from Amazon.