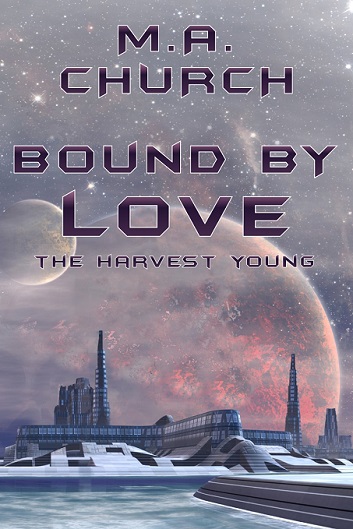 Volume 3 of The Harvest Young

Prince Hamza and Neo have been mated for many years. They have been peaceful years, as the Tah’Narians have successfully recovered from the attacks which lead them to initiate the harvest. That peace is broken when their planet is attacked by the Ne Reyn, who kill Hamza’s father, King Duran. Struck by grief, Hamza vows vengeance, but will he take it too far and commit the same sins as those that nearly wiped out Tah’Nar? Can Neo pull his mate back from the brink before it’s too late?

This latest, and long-awaited, installment of The Harvest Young series brings the books in something of a full circle from the events that launched the first series. The Tah’Narians faced extinction once, and now Hamza contemplates committing the same atrocity on another race. Hamza’s anguish is understandable, but what he plans rightly horrifies his mate and his friends. The book starts shortly after the end of the previous book, with the births of children to Szin and Dayo.

With nearly three years passed since the previous book in the series, I confess I forgot who most of the large cast of characters were, but there were more than enough clues sprinkled into the story to jog the memory. On top of that, the sort of “intervention” staged to talk Hamza out of his course of action provides a good excuse to recount the major events of both series to date. In all, it’s a nice device to help catch you up.

As with other books in the series, the pacing is rather fast, with a situation that develops very quickly. It doesn’t leave a lot of room for character development, yet I wouldn’t say the story suffers for it. This is not a character-driven book, but one in which events propel the book forward. The characters are defined well enough to get a sense of who they are and what drives them.

“Bound by Love” is available from Amazon.