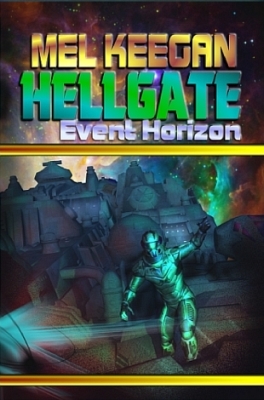 The Hellgate saga comes to a rousing if bittersweet conclusion in this sixth and final installment. If you've made it this far in the series, you'll almost certainly find this book hard to put down.

The team of soldiers and scientists, both human and Resalq are in the final stages of preparing for their first trip into transpace aboard the semi-sentient Lai'a, to track down the Zunshu who have been destroying the human settlements of the Deep Sky in the same way they almost wiped out the Resalq. First, however, there's what everyone hopes will be the final battle for the independence of the Deep Sky worlds from Earth's oppressive government. The home worlds have sent another battle group to Jagreth, despite what happened in the attempt to reassert their domination at Velcastra, and the team is on hand to see that the battle unfolds as planned.

With the colonies relatively safe from Earth's interference, Neil and Curtis prepare for the voyage aboard Lai'a to plunge into the unknown depths of the Hellgate storms and meet the Zunshu. If you've picked up the clues in the earlier books, what they find when reaching the Zunshu home world won't be too big of a surprise, but the details of the how and why still make the story extremely interesting, not to mention relevant. As often is the case with ‘good’ science fiction, the author uses a fictional future and alien races to create situations that provide a powerful commentary on issues that face humanity today. Racism and religious zealotry both get discussed in the context of this story.

There's a lot more to this story than the interesting philosophical questions and commentary on contemporary society. “Event Horizon” is a truly action-packed adventure that careens from one dramatic scene to another. In the rare calm moments between battles and alien encounters, there's a little time for romance as well.

It's the human factors that makes this such a great story, all six expansive volumes of it. The stories are populated by a large cast of characters, all of whom seem quite real, which in turn makes the fantastical future seem quite believable. One of the advantages of such an epic story which spans six books is that it gives you time to develop the characters into fully three dimensional people, with very realistic and often complex relationships. The main characters, Neil and Curtis, form a bond that is much more believable than the love-at-first-sight made-for-each-other plots common to contemporary romance. Both men have pasts, which involved other lovers who are still part of their lives. The beauty of their relationship is that they've both reached the same place, mature enough to know what they want and that it takes hard work to get it.

Reading such an expansive story is a rather daunting undertaking, but it's well worth it.

“Event Horizon” is available from Amazon